The special ACS TVC for TAI

One of the largest space simulators in the world, designed and built by ACS for Turkish Aerospace Industries (TAI).

Another one of the largest space simulators designed and built by ACS. It is located in Ankara, Turkey, and is installed at the USET (Space Systems and Integration Testing) centre, the important Turkish Aerospace Industries (TAI) facility which, among other services, carries out "Environmental Testing" activities to demonstrate the resistance of satellites and their components by recreating the real environmental conditions to which the satellite is subjected from launch to entry into orbit, thus ensuring its correct operation.

A world leader since 1952 in the field of environmental test chambers and in particular in the aerospace sector, ACS now boasts a long list of large Thermal Vacuum Chambers designed and built to meet specific customer requirements: in addition to the now famous case of the simulator built for the RAL UK, we recall the TVCs built for the European Space Agency ESA,, the TNO Dutch Research Center and YARZ, leader in telecommunication in Russia.

ACS large space simulator has been operational since the environmental tests were carried out for the GOKTURK-1 satellite, launched on 5 December 2016 from the European spaceport in Kourou, French Guiana. The GOKTURK project, planning to launch the GOKTURK-3 satellite by 2022, aims to provide high-resolution images from anywhere in the world, day and night and in any weather condition.

The space simulator has the capacity to test large specimens, with a temperature range of -190°C to +100°C and a vacuum limit of 1x10-7 mbar. 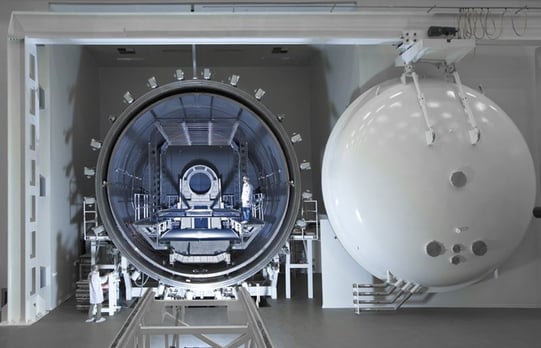 All the functions and processes of the space simulator are managed by an integrated control system, made by ACS.

In this video, released by TAI, you can see the USET Test Centre, our special vacuum chamber and the GOKTURK and TURKSAT satellites.

Small satellites are becoming increasingly popular and, as with any object destined to travel in space, they must be ...
Read the article