In order to meet a growing market demand in Quality and Reliability, GESTLabs once again chooses ACS climatic chambers.

The CST1000/2T air to air thermal shock test chamber is the new acquisition of GESTLabs.

Staying ahead of market needs

“The decision to purchase this model was determined by the desire to respond to market demands related to products of increasingly important dimensions, which cannot be managed through standard chambers. A further advantage lies in being able to test a large number of samples at the same time, significantly reducing testing times and related costs. To meet this requirement, the new chamber has a horizontal movement mechanism and not a vertical one." says Luca Agostoni, the company's Business Development Manager.

From testing on LEDs to small satellites: the CST1000/2T responds perfectly to the Lab needs both in terms of technical features and volume, satisfying the market demand to carry out tests not only on components but also on semi-finished products, objects that are very close to the final product even in their intermediate dimensions.
The large size of the chamber and the horizontal movement also allow optimizing costs and working time, by inserting more specimens in the chamber at once.

Thermal shock test chambers are used to subject the sample to severe shocks through the sudden and repeated passage from a high temperature to a low temperature area, with the aim of identifying defective components or those subject to infantile mortality, mainly in the electronics sector.

What is a Thermal Shock Test Chamber and how does it work?

Among the standard solutions produced by ACS, 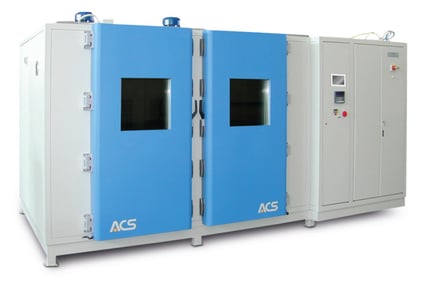 the CST1000/2T is the largest chamber for thermal shock testing. 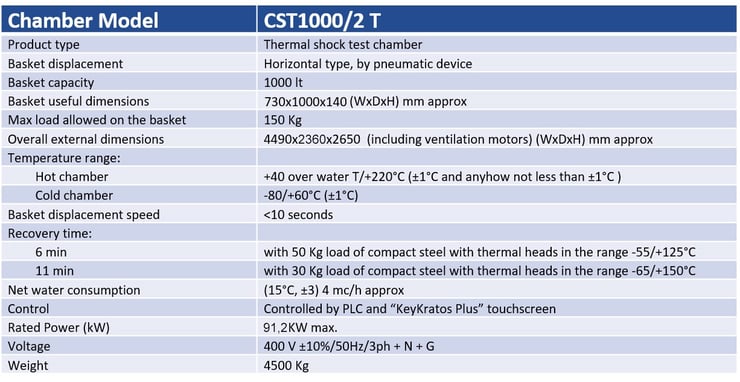 In the basic configuration, the chamber control is realized by PLC with "KeyKratos Plus" touchscreen, offering numerous advantages such as:

Besides the CST1000/2T model the ACS “traditional approach” - having the specimen moving in a basket from the cold and hot rooms - includes the 500 l (horizontal movement) and the 320 l (vertical movement). The new 130 l model, named CST130/2T “spinner”, has been completely redesigned based on the Discovery My model and is equipped with MyKratos™ control system, including the innovative MyAngel24™ remote assistance service.
The “alternative approach” of CST "flapper" models (130 e 320 l) specimen is fixed in its position and the chamber is connected alternatively to hot and cold chambers.

Thanks to the extreme flexibility that characterises ACS, a very special new realisation: a device capable of ...
Read the article