Airbags and components are tested through a combination of climatic, mechanical, electrical and optical tests according to strict standards.

An airbag is a passive safety system used in the automotive sector: it is a device installed in vehicles, usually located in the dashboard, steering wheel and sometimes in the seats or on the side. It inflates instantly if the car is subjected to a violent impact.
We generally only think of airbags for cars, but there are different types, for example for motorbikes, in the form of waistcoats or integrated into jackets or suits, and also for hikers in the form of rucksacks.

We are all familiar with crash tests, the special form of destructive testing that car manufacturers subject vehicles to before placing them on the market.
Even before such tests are carried out, airbags and components are tested through a combination of climatic, mechanical, electrical and optical tests, according to strict standards generally set by the car manufacturers themselves. For example, we can refer to the standards defined by ISO 12097-2 Testing of Airbag Modules and ISO 12097-3:2002 Testing of inflator assemblies.

Each component must be tested under simulated environmental conditions, verifying the tightness of the bag's fabric, seams and joints; it is equally essential to ensure the correct functioning of the sensors and connectors. They are in fact crucial components of the system that detect deceleration due to impact, which activate the detonator that allows the airbag to deploy through a signal sent to the control unit.
In addition, the process of airbag deployment is verified by recording it through high-speed cameras positioned at all the necessary angles for proper evaluation.

Airbag test chambers are usually custom-designed according to the specific requirements of the test standards needed for the test.
ACS can design and manufacture customised solutions for airbag testing. 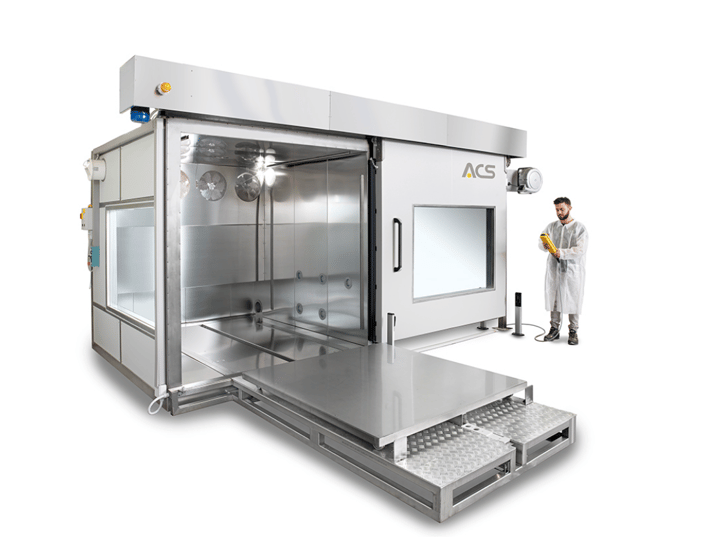 Do you need an airbag test solution tailor-made for your company's specific needs? Contact the  ACS team

Among the main features to be considered in the design of airbag test chambers is first and foremost the volume of the test area: the test chamber must have a usable capacity to contain the entire device, and at the same time allowing air to circulate freely to ensure the homogeneity of the climatic conditions reproduced.

It is also important to decide on the mode of deployment of the specimen. It is possible to choose between two different types of tests: one with airbag deployment on a dedicated sliding frame, therefore outside the chamber, and the other directly inside the test chamber.
Both types have the common goal of verifying the airbag's explosion under the required climatic conditions.
In the case of outside deployment, the speed at which the test chamber door opens and the slide frame housing the test specimen is released is therefore crucial: the entire process must be able to take place within a matter of seconds (≃ 10 s).
If, on the other hand, it is decided to deploy the airbag inside the test area, the chamber will be equipped with windows at the sides to allow the cameras to be placed outside the chamber, while still guaranteeing full visibility of the deployment process.